Social media marketing can be a fantastic tool for promoting your business online and marketing your brand. Done properly, social media can generate a buzz that has the power to be seen by thousands if not millions of people. On the other hand, a post that goes bottoms up has the potential to be seen globally.

Here at Seven Creative, we’ve put together a few of our favourite social media successes and fails for you amusement. Enjoy!

Honda’s upside down approach to social media paid off in a big way when they offered $500 to the most active Pinners on the social scrapbooking site Pinterest to take a 24 hour break from the site to promote the new CRV. Ingeniously, they called the break a ‘Pintermission’ and then asked the winners to create a board about all the activities they enjoyed on their day off. Honda reached more than 5.5 million followers of the chosen Pinterest users  with this campaign.

We love the chocolate Facebook thumbs up created by Cadbury too. And no, not just because it looks delicious! Constructed as a Thank you to their fans, a real time video feed of the construction process drove massive fan engagement and resulted in a huge quarter of a million people actively involved in the campaign. They also gained an extra 40,000 fans! I wonder how many more they would have gained if they’d promoted a competition to win the giant choccy hand??! 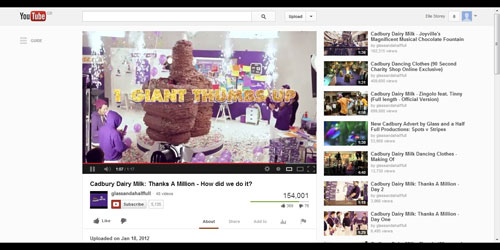 McDonalds dropped a real clanger with their social media activity which resulted in their campaign being terminated within just two hours. Using the hashtag #McDStories, Twitter users were ‘supposed’ to share heart warming anecdotes about their McDonalds experience. Instead,  tweets about food poisoning, fingernails found in burgers and chicken nugget horror stories went viral. Well, we could have predicted that!

American Apparel’s Hurricane Sandy promotion backfired spectacularly after it offered customers 20% in an email stating “In case you’re bored during the storm, 20% off everything for the next 36 hours.” In reality, those 36 hours turned out to be devastating, with more than 130 deaths, 4 million with no power and billions in damage. American Apparrel apologised saying the campaign came from a good place. Too late, damage done!

Australia’s SellItOnline.com said that it would donate money to Tasmania’s bush fire crisis, but only if people liked its Facebook page. Understandably, an angry fan responded, “Don’t take advantage of this situation. If you’re for real, donate through the right sources. Don’t manipulate social media for your own benefit.” Another wrote, “F*** off with your opportunist marketing trying to take advantage of other people’s tradegy. If you were a decent company you’d just be putting a message up saying you were donating x amount and earning some kudos.” Mmm you’ve got to see their point……

If you’re struggling with social media, and would like some advice on setting up and or managing your businesses social media accounts, Seven Creative can help. We offer a social media set up service, social media management packages, and even regular social media workshops in Sheffield. Contact us on 0114 383 0711, email chris@sevencreative.co.uk or contact us through our website.